On Sunday 20th February I took part in the Birmingham Running Festival where I took on the challenge of running my first half marathon. At the back end of last year, a friend had mentioned to me that she had decided to sign up to the race which inspired me to also take part. I wanted to set myself the challenge and see how far I could push myself. It has also allowed me to raise funds for the fantastic charity, Melanoma UK!

Melanoma is a less common type of skin cancer but is seen as more dangerous. This is because it’s more likely to spread to other parts of the body if it is not caught and treated early. The exact cause of all melanomas isn’t clear, but it is known that exposure to ultraviolet radiation (from sunlight or tanning lamps/beds) increases your risk of developing melanoma. Around 42 people are diagnosed with Melanoma every day.

Melanoma UK’s vision is to increase the UK’s awareness of melanoma and its prevention through advocacy, education and research. They also provide support to Melanoma patients, caregivers and medical professionals as well as creating a support network advocating for additional treatment options.

I was extremely nervous before the race. The night before I honestly felt like a child on Christmas Eve, I found it so hard to get to sleep. In hindsight, I definitely could have done with doing some more running and stamina preparation for the run, I underestimated how hard it would be! I had been running up to 10km prior to the race and had never actually attempted the full 20km, so it was very much a shock to the system. 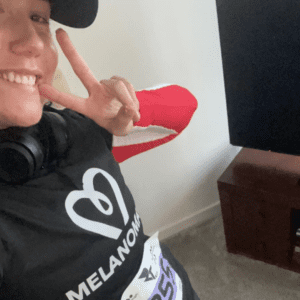 Having been to watch charity and organized runs and walks in Sutton Park before, I assumed I knew where this race would start. Much to my disappointment when I turned up on Sunday morning in the rain and wind, I quickly realized I had arrived at the halfway point of the course and not the starting line. The quickest way for me to get to the start point was to run. So, I had added an extra 3km to my half marathon before even starting!

My goal for the run was to attempt to run as much of the first 10km as possible and then for the following 10km only walk where the route lead me uphill. My aim was also to complete the half marathon in 2 hours and 30 minutes. When my Apple Watch clocked me at 10km, I was only actually at 7km of the half marathon course. The first 10km weren’t too bad, and I would say all the way up to about 18km I wasn’t in too much pain. However, when I hit the 20km I really did want to stop. I managed to do my half marathon in 2 hours and 21 minutes, but because I had to carry on for an additional 3 km by the time, I crossed the finish line it was 2 hours and 40 minutes. My favourite part of the race was probably when I finished! Although it was great for the first couple of laps being surrounded by other runners.

My partner, our dog Spike and my mom met me at the finish line. They had stood in the rain for nearly 3 hours catching only brief glimpses of me as a completed each 5km lap. I was so relieved to finish the race and to get into a warm car with heated seats. The thought of a warm bath and a large glass of rose got me through the last 5km I think!

I think I would do a half marathon again, but I would definitely need to do some more training and preparation as I now know what to expect. Despite all this, I was still very happy with the time I achieved, and it has given me a great benchmark for my next run, to be confirmed……

I am so proud of myself for pushing myself to my limits! My feet are ruined, and my legs and back are in bits, but it was totally worth it to prove to myself what I am truly capable of! It is great to see how much I have managed to raise for Melanoma so far and I would hope that this will only carry on going up in the coming days and weeks! As for my next run, this is yet to be confirmed. I think I will take some time to recover from my first half marathon before challenging myself to any further runs and to the soles of my feet grow back!

You can find out more about which cookies we are using or switch them off in settings.

This website uses cookies so that we can provide you with the best user experience possible. Cookie information is stored in your browser and performs functions such as recognising you when you return to our website and helping our team to understand which sections of the website you find most interesting and useful.

Strictly Necessary Cookie should be enabled at all times so that we can save your preferences for cookie settings.

If you disable this cookie, we will not be able to save your preferences. This means that every time you visit this website you will need to enable or disable cookies again.

This website uses Google Analytics to collect anonymous information such as the number of visitors to the site, and the most popular pages.

Please enable Strictly Necessary Cookies first so that we can save your preferences!