Surveyors play a key role in shaping the world. From helping to develop sustainable cities, to solving global issues like urbanisation, migration, and resource scarcity. Surveyors are involved throughout the lifecycle of buildings, from buying the land to managing the finished building. They’re even involved in a building’s final demolition decades later.

But why is there such a shortage?

There are several reasons why there is a shortage of surveyors. 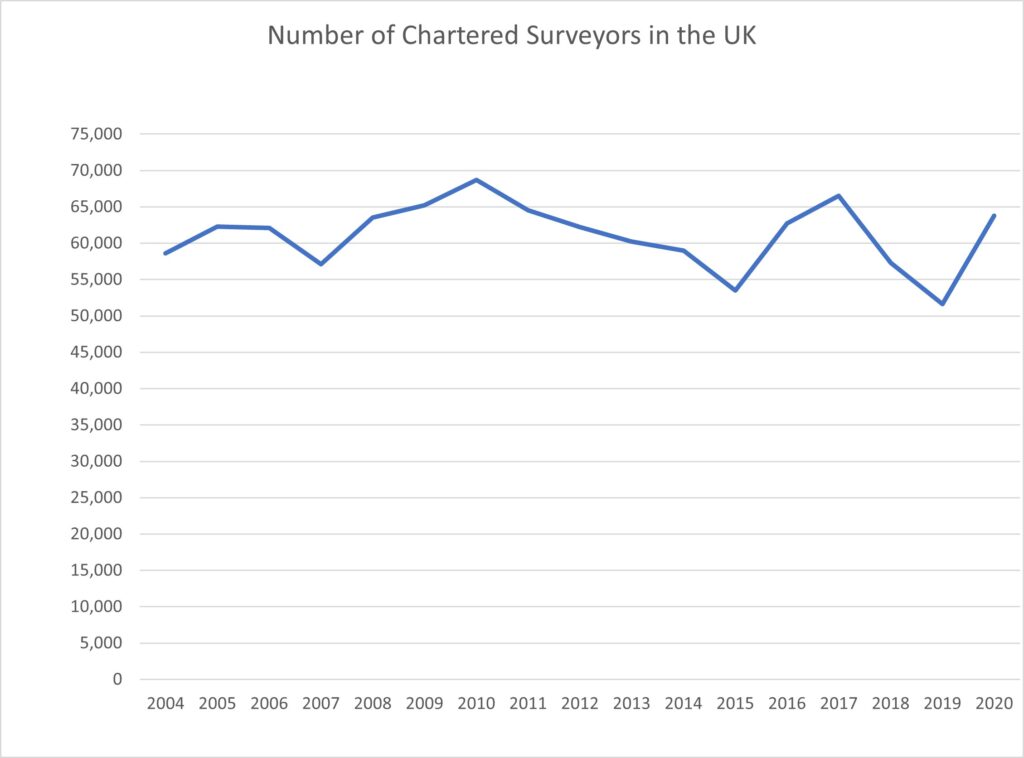 Due to the recession, 2007 saw a sharp decline of surveyors. Companies made redundancies, with surveyors suffering the most due to an over-supply of qualified staff. This meant that candidates had to find alternative roles due to job loss. This also hugely affected graduates who were ‘promised’ roles when they finished their degrees. Many students were then discouraged from studying which could explain the decline over the next few years.

The number of surveyors peaked in 2010, many students would now have graduated and achieved their RICS status. However, the number of surveyors within the UK continued to decline even though the property industry began to improve. Students no longer wanted to pursue a career in surveying.

Becoming a chartered surveyor takes a long time. However, RICS are keen to not create barriers to entry due to the demand. There are four different routes that individuals can take, with the shortest being a minimum of five years!

Route 1: A RICS accredited degree followed by the APC (The Assessment of Professional Competence). The APC is a structured training work placement over a minimum of 24 months to ensure Chartered Surveyors are competent to practice (5 Years).

Route 3: Professionals with a degree with at least five years post-degree experience can achieve membership in 12 months through a fast-tracked version of the APC (9 Years).

Route 4: RICS are keen not to create barriers to entry. They recognise that obtaining a degree can be expensive and not for everyone. Therefore, young school leavers can sign up for the Chartered Surveyors Training Trust. This is an organisation that helps young people to become surveyors by offering apprenticeship schemes that count towards associate membership (AssocRICS) (6 Years).

Another reason why is due to the UK’s decision to exit the EU. Being a member of the EU allows EU Nationals the option to work and live in the UK. However, Brexit has made it very difficult and impossible for these people to move to the UK, which is likely to be a reason behind the shortages in the UK from 2019 onwards.

MRICS Surveyors are in demand all over the world

Although RICS originated in the UK, the chartered status is recognised globally. This means career opportunities as an RICS registered surveyor are endless. RICS has members in over 120 countries, including North America, South East Asia, the Middle East, South Africa and Europe. The opportunity to move abroad is a big benefit compared to working in the UK.

Surveyors are too comfortable

Salaries across the UK are starting to rise because of the shortages and candidates are becoming aware of their market worth. Those with an accredited status and a wealth of experience have the best pick wanting a competitive salary and flexible benefits with clear career development.

If you want to get ahead of the market, check out our other blogpost! Surveyors have been working in a candidate led market for a while now and you should be taking advantage!

You can find out more about which cookies we are using or switch them off in settings.

This website uses cookies so that we can provide you with the best user experience possible. Cookie information is stored in your browser and performs functions such as recognising you when you return to our website and helping our team to understand which sections of the website you find most interesting and useful.

Strictly Necessary Cookie should be enabled at all times so that we can save your preferences for cookie settings.

If you disable this cookie, we will not be able to save your preferences. This means that every time you visit this website you will need to enable or disable cookies again.

This website uses Google Analytics to collect anonymous information such as the number of visitors to the site, and the most popular pages.

Please enable Strictly Necessary Cookies first so that we can save your preferences!